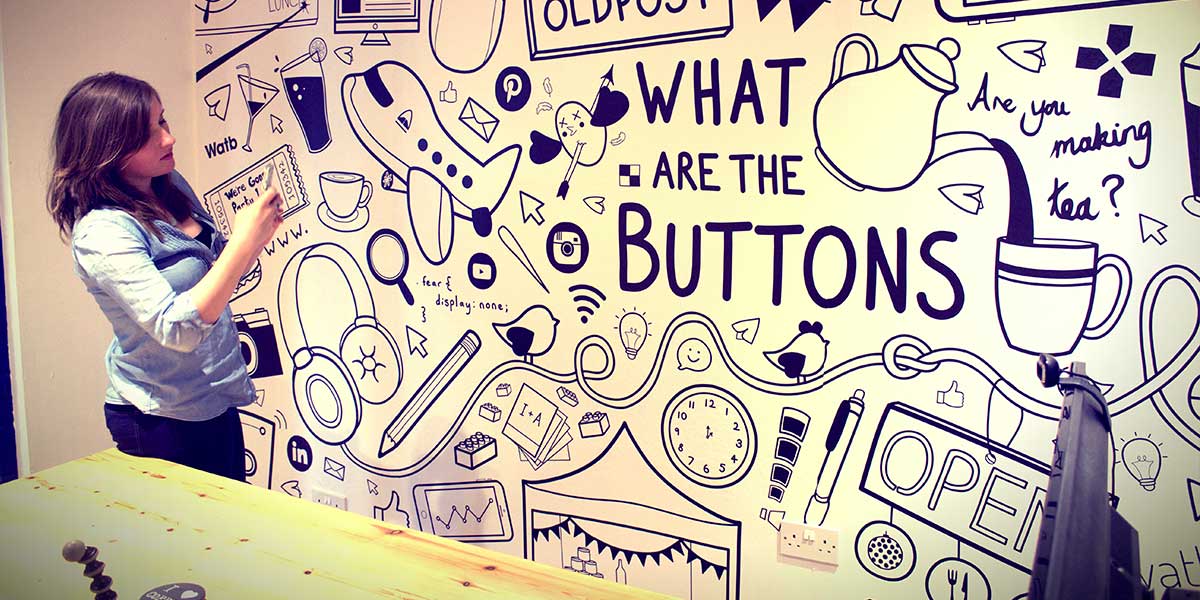 Being here on work experience, I’ve had such an amazing summer at WATB. I’ve had the chance to work on tons of different projects, from graphic design to editing. But by far the biggest and most exciting opportunity I have been given is designing a MURAL for their meeting room. With a 2 by 3 meter canvas to work on, the end goal of this project was to create a wall that illustrated the story of What Are The Buttons.

From the beginning, we knew that we wanted the wall to be black and white – simple but sophisticated! We took some inspiration from murals across Pinterest, and from there it was time to use my imagination to make every illustration meaningful to the team and their experiences at the company.

I used Adobe Illustrator to draw out all the individual illustrations, then put them together leaving minimal white space. There are a few repetitive images I used as fillers where the gaps weren’t big enough to do a completely new illustration; namely paper airplanes, light bulbs, and mouse icons. The vector image was then printed and fitted by Printmates (Redhill).

Not only do the illustrations represent a lot of the WATB clients, but there are also plenty of inside jokes floating around (the most well known ‘are you making tea?’ line included). Across the board, we have references to Oldpost, the home of WATB, and, of course, an acknowledgment of ‘Why Audio Tastes Better’. There are plenty of nods to web and graphic design too, including Michael’s witty CSS joke:

With a wide range of clients to represent, I managed to fit in a party ticket (Mirage Parties), a jet plane (Instajet), an open sign (Barni), and some Lego (Inspect and Adapt). There is also a marquee (Fantastic British Food Festivals), a laser (Thinklaser) and a cute dog in the bottom right hand corner (Mishko and Shampoo). We even decided to kill off one of the Chickidee birds!

The end result I am extremely happy with! It’s such a cool and unique opportunity to see my illustrations blown up across a huge wall, and I’ve definitely left my footprint in the WATB office!